I was extremely lucky. It was the 80’s and I was school teacher. In my wildest dreams, I would never imagine that almost forty years later, I would be writing, publicly, about coaching and leading schools.  This would never have happened without support; tons of support from family and friends and some very strong words of encouragement from a small group of female leaders. It took the women who were already leading in education in New Brunswick, Canada in that era, to wrap their arms around me and to tell me to go for it.

Four school administration positions, two district positions, including nine years as superintendent (all in one district) and one year at the Department of Education later, I retired in 2013 to be a road warrior and work full time in service to schools needing improvement. And, I can honestly say, I would never have stayed the course, without the mentoring of a female superintendent and other strong women leaders in the early stages of my career.

I can still remember the first time I was invited to a WEA (Women in Education Association) event in the early 90s. It was a group of very strong, independent and successful women who were leading schools, districts, university departments and DOE positions in our province. To say that I was in awe and maybe a bit intimidated would be an understatement.  So many years later, I can close my eyes and be sitting in a room with them. I can almost remember all of the first conversations and learnings.  I am sure if they were here with me today, they would be pleasantly surprised at the impact that they had on me personally and professionally. I hope that they would be proud.

During those early years as a school administrator, I was blessed with a small circle of female kindred spirits who were school and district administrators. We became friends while attending a conference together and we were there for each other for years; through very challenging professional struggles and personal hardships. Without these women, I know I would have made an early exit from education. The bottom line was we had each other’s back.

Life comes full circle. Over the years, I have had the opportunity to pay it back, encouraging women to sit at the decision-making table, allowing others to see how they think and feel about what needs to happen in our schools and districts. I am blessed to have two strong daughters and, in my daily work, I have strong female principals to coach and women who are my thought partners, co-workers and dear friends. This week, I had an opportunity to have dinner with two talented women who I have watched grow as leaders.  One is beginning a new career as a school principal and the other is retiring from a district leadership position. I am so proud of the influence and impact both of them have on what happens in education. And, in July, I am fortunate to be presenting at a conference solely dedicated to empowering women to lead in education. (https://www.solutiontree.com/events/women-in-education-san-antonio.html)

This conference in San Antonio is not about male bashing or why women need to take over the world. It isn’t about comparing what men can do and women can do.  That has never been what I am about or what I want to be about. It truly is about seeing women understand their ability to impact and lead and to encourage continuous growth.  In Canada, women continue to make up the majority of workers in education-related occupations.  The proportion of women is especially high at the elementary and preschool levels, where they make up 84% of the teaching staff . In our high schools, it is around 57%. (from Statistics Canada). 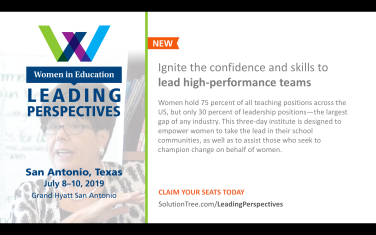 I was not able to find the statistic that demonstrates how many females lead in education positions in our country but from this image, you see the numbers in the United States. I am sure that Canada’s would be similar.

I am surrounded by many amazing women friends who support and lead change.   I also live thirty minutes from a city with an incredible female mayor- Mayor Dawn Arnold. She became the mayor of Moncton in 2016 and she has led by example. She is a visible, forward-thinking, inspiring, organized,  smart, analytic and fun person (just a few of her qualities.).  She shows up, physically and in every way to move this city forward.  She uses social media to connect to her constituents, to celebrate our hockey and basketball wins, to attend an outdoor skating event in the brutal cold, to seek help when she needs advice and support for city projects and reports out with a live video chat.  Of course, she does this in both of our official languages, French and English.  My favorite image of Dawn is her daily posts of her bicycle ride to and from work. She is working hard to promote the city trails and the need for a more healthy lifestyle for all of us.

Lastly, I can not write about women in leadership without commenting on New Zealand’s young prime minister, Jacinda Arden. If you have not heard her speech to the United Nations General Assembly in September, 2018 or read about her leadership through the recent mosque shootings in Christchurch, NZ, you really should.  Again, a female who leads by example and knows that her words and actions have impact every single day.  My favorite quotes from her (so far) are:

“If you sit and wait to feel like you are the most confident person in the room, you are probably going to be left by yourself.”

“One of the criticisms I’ve faced over the years is that I’m not aggressive enough or assertive enough, or maybe somehow, because I’m empathetic, it means I’m weak. I totally rebel against that. I refuse to believe that you cannot be both compassionate and strong.”

So, I encourage my female readers to come to San Antonio and reflect, learn and grow with us. One of the other presenters, Jane Kise wrote a great blog about ‘why’ this conference and I am sharing the link here. (https://www.janekise.com/2019/02/why-a-women-in-leadership-conference/).  And, to my male friends and thought partners, you know that your incredible leadership and service does not go unnoticed. It is about adding our voices to the table, not removing yours. Strong, male leaders provide us with role models and great work partners.  We all need each other.  Have a great week.  See you next Saturday.

AUTHOR OF QUOTE: Jacinda Arden, Prime Minister of New Zealand- 38 years old At 37, Ardern became the youngest leader of the Labour Party in its history. She is also the second female leader of the party after Helen Clark.

View all posts by karenpower58